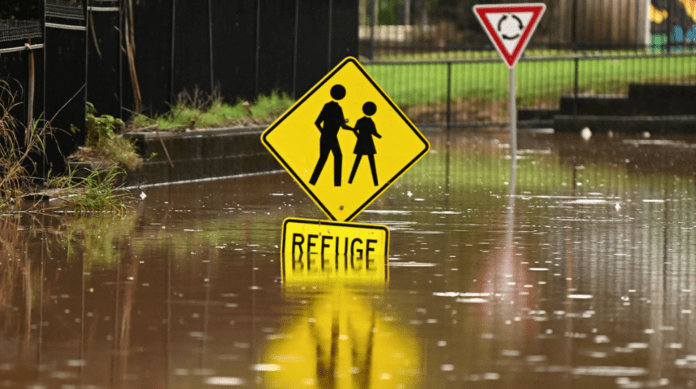 Some floodwaters in northern New South Wales are beginning to recede, allowing residents to return home to assess the scale of the disaster.

On Thursday, Lismore City Council said Wilsons River was “slowly receding” and the Bureau of Meteorology said it dropped below the major flood level about 9.15pm.

Severe weather warnings were still current for almost the entire NSW coast on Friday morning, but thankfully, they didn’t include more forecasts of flooding rain.

While heavy rain is set to ease today over northern NSW, another weather warning has been issued further south.

Strong winds are being felt across the state with a Gale Warning issued for NSW’s north, down to the south coast.

NSW Emergencies Minister Steph Cooke said there were 20 evacuation orders and 11 evacuation warnings in place across the state, affecting about 30,000 people.

The Wilsons River near Lismore peaked earlier than expected, at 11.4m, but Dean Narramore from the Bureau of Meteorology said moderate and major flooding were still ongoing.

“The weather system is making its way down the east coast, and we will see other communities impacted as it moves south over the next couple of days,” Ms Cooke said.

Communities that live on or near the Wilsons, Richmond, Clarence and Yarrara Rivers, particularly downstream whether flood events are current, have been urged to stay up-to-date with the latest forecast and warnings.

The Lismore flood levee has been overtopped by floodwaters, while Byron residents have woken up to find their northern New South Wales town underwater after Ballina Shire copped more than 200 millimetres of rain overnight.

“Unfortunately, our worst fears have been realised,” she said.

There are 10 evacuation orders and eight evacuation warnings in place across the Northern Rivers and Mid North Coast, but Ms Cooke warned that number could quickly change.