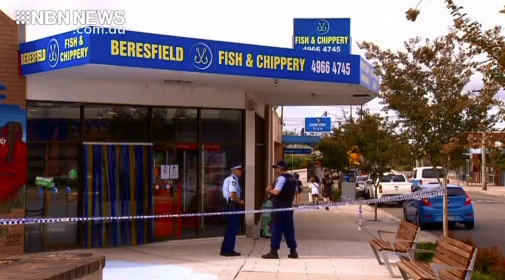 A man has been charged over an armed robbery and pursuit west of Newcastle yesterday.

Police were called to Beresfield Fish and Chippery around 1:30pm, after the owner’s father called triple-0, reporting a man armed with a gun was threatening two female employees.

Police say the man demanded cash, banging a knife on the counter, before leaving with around $200.

They say he then walked down Beresford Avenue and threatened a 21-year-old man with the gun, demanding his phone and wallet and drove off in a Mazda 3.

Following a large-scale manhunt, police tracked down the car on Woodberry Road and began a short pursuit.

The Mazda stopped and the 43-year-old driver was arrested around 1:50pm.

Officers also seized a gun and knife from the car, while the vehicle was taken for forensic testing.

The man was taken to Raymond Terrace Police Station where he was subjected to a breath analysis, which returned an alleged reading of 0.244.

He was charged with five offences including two counts of robbery while armed with a dangerous weapon, and one count each of possess unregistered firearm, drive motor vehicle during disqualification period and high-range PCA.

He was refused bail to appear at Newcastle Local Court today.

He was later taken to the Mater Hospital for treatment, where he remains under police guard.