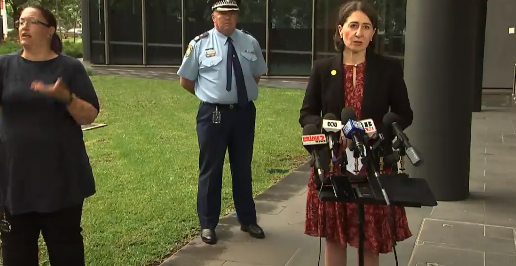 The strict new measures were decided in a lengthy meeting overnight between the Premier, Border Force and Immigration Minister, Peter Dutton.

“This is important for the community to know this is where we stand.”

“This is difficult for some, because there are a number of ships off our borders which are carrying Australians, but this is what we have to do.”

According to the Federal Government, there are more than 3000 Australians stranded on more than 30 cruise ships across the globe.

The state and federal governments are now scrambling to nut out strict new border force rules to screen passengers disembarking from cruises.

The new measures come exactly one week after 2000 passengers from the Ruby Princess disembarked at Circular Quay.

More than 130 of those passengers are now are infected with Coronavirus.

“I don’t want anyone coming off a ship in Sydney until we have confirmed new protocols and we have the new sign off on the new arrangement.”

A number of Ruby Princess passengers who have now tested positive for COVID-19 were able to move freely through the city.

Tamworth man, Greg Butler, says he disembarked the ship and caught a train to Tuggerah before driving back to regional NSW.

“If we had’ve known this, we would’ve acted in a very different way,” Mr Butler said.

“They just let us off the boat, gave us a sheet of paper telling us about self isolation and then left us to get home any way we could.”

He and his wife have both tested positive to COVID-19.

On Tuesday, a 77-year-old woman, who was also a passenger on the Ruby Princess died from the virus.

Overnight there were 190 more confirmed cases of Coronavirus in New South Wales, bringing the state’s total to 1,219.