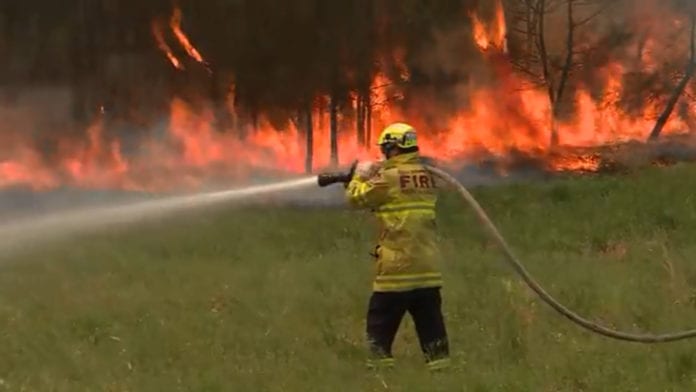 Firefighters are preparing for a horror week, with the out of control Kian Road fire expected to worsen tomorrow.

Fires further south are also continuing to cause anxiety for locals.

The community of Johns River in particular remains on edge tonight after the village was only moments away yesterday from being destroyed.

The Stockyard Flat fire which gutted the village of Yarrowitch, east of Walcha, is still burning out of control.

The fire has joined with several others and is burning towards Port Macquarie.

The Oxley Highway remains closed between Walcha and Wachope.

Dozens of firefighters from South Australia and Western Australia are assisting the R-F-S on the fireground ahead of tomorrow’s extreme conditions.

Two people perished in the town over the weekend when the Kangawalla fire tore through the area.

Closer to the border, the out-of-control Mount Nardi fire has grown to 2,600 hectares since yesterday.

The blaze is burning in two directions and although there is no immediate threat to homes, the RFS is warning residents to stay alert as tomorrow’s extreme conditions could change that.

The RFS says those who have not prepared for tomorrow’s weather, should not try and stay to defend their homes.

So far, the fires have burned through more than 1 million hectares across the state. The majority of this land is located on the Mid North and North Coast.

Some North Coast residents are picking up the pieces in Nambucca, but it may not be the end of their battle.

The Kian Road fire has burned through more than 17-thousand hectares.

TONIGHT: Two RFS volunteers injured, homes destroyed, and now, residents around Taylor's Arm are bracing for more. Firefighters are preparing for a horror week, with the out of control Kian Road fire expected to worsen tomorrow. @nbnnews pic.twitter.com/oC0TVUUbca

Singleton Army Barracks in New South Wales is on standby to provide accommodation and catering support to firefighters from the Victorian Country Fire Authority on Tuesday.

It’s been announced the Australian Defence Force will be mobilised to assist emergency services in fire affected areas. They will provide support, training and transport across the state.

The Department of Education has confirmed more than 300 schools across the state will be closed on Monday and Tuesday. See which ones here.

The fire danger tomorrow is now expected to be worse than originally forecast. The Illawarra/Shoalhaven is now forecast to experience a Catastrophic fire danger, as will Greater Sydney and Greater Hunter. More info here: https://t.co/RQyA5UAi8x #nswrfs #nswfires pic.twitter.com/1xlwByvpMz

The City of Newcastle will close Blackbutt Reserve on Tuesday, and an emergency plan has been set up including the relocation of animals to veterinary clinics if necessary. Staff will be on site monitoring the welfare of animals to ensure they are safe and hydrated.

Lake Macquarie will also close several reserves and pathways including Mount Sugarloaf and the Sugarloaf State Conservation Area, the Fernleigh Track and Green Point Foreshore Reserve, Valentine. The closures will remain in place until 5pm, Wednesday.

Monday 1pm | A Temporary Home for Hundreds of Firefighters

Charles Sturt University’s Port Macquarie campus is helping hundreds of firefighters by providing them with food and beds to sleep in.

Dozens of students and staff have been lending a helping hand since the fires broke out.

For those who would like to donate non perishable food, visit CSU residences at 28 Kingfisher Road 9am to 5pm, Monday to Friday.

Residents are working to save animals at rainbow flat

NSW Ambulance have announced current conditions can have serious impacts on health and are asking those in fire affected regions to ensure they stay hydrated and pay attention to respiratory issues and heat symptoms including dizziness, headaches, racing pulse and nausea.

People are advised to be aware of embers, falling debris, damage to surroundings and reduced visibility which can cause injury.

Those with pre-existing medical conditions should ensure they have all medications with them. If you are seeking supplies, contact the SES info service number 1800 227 228.

State of Emergency declared for NSW. Please be prepared and follow instructions from our Emergency Authorities. Please make sure you download the Fires Near Me NSW app. pic.twitter.com/M9JtMXnh38

There’s a nervous few days ahead for firefighters with some hot days and strong winds expected.

Gavin Morris has the latest on exactly what’s in store.

The village of Willawarrin in the Macleay Valley joins the long list of communities now picking up the pieces.

48 hours on, and some locals are still struggling to gain access.

The Hunter is digging deep to help its neighbours rebuild after the devastating bushfires.

Donations are pouring in by the car-load, while volunteers are providing around-the-clock support.

Monday School Closures
As per the Department of Education Website

The worst fears have been realised from the unprecedented bushfires that have burnt so destructively across Northern New South Wales.

Three people are dead, several are missing and more than 150 homes have been lost.

More losses are expected as the hours and days go by.

Scott Morrison has advised the ADF will be brought in to support firefighters.