A 56-year-old man has been airlifted to hospital, after he fell from a retaining wall on the Central Coast.

The man was gardening at his Avoca Beach home at around 2 o’clock on Saturday afternoon, when he fell around three metres.

He suffered back, chest and head injuries in the fall and was taken to a nearby oval to meet a waiting helicopter. 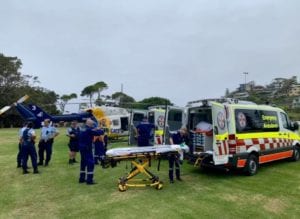 A local cricket game had to be stopped to allow the CareFlight helicopter to land.

The man was flown to Sydney’s Royal North Shore Hospital.

HYDROPONIC SET UP ALLEGEDLY SEIZED ON THE CENTRAL COAST