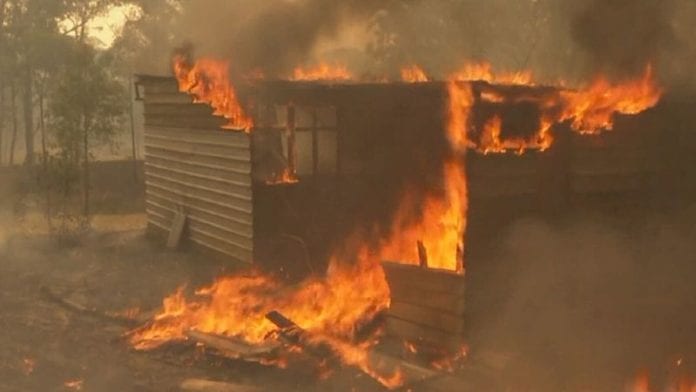 Fire conditions across New South Wales are continuing to deteriorate this afternoon, with EIGHT emergency warnings currently in place.

More than 250,000 hectares has already been scorched by the Gospers Mountain Fire, which is burning in the Wollemi National Park west of the Central Coast.

There’s currently a risk to lives and properties at Colo and Colo Heights, with residents in those communities advised to seek shelter as the fire front approaches.

The message to those in Upper Macdonald, Perrys Crossing, Fernances and Mogo Creek is to continue to monitor conditions.

The blaze is also expected to join with the nearby Thompsons Creek blaze.

An emergency warning is also in place for the Wrights Creek Fire, which is burning to the west of Kulnara on the Central Coast.

The blaze is currently moving towards Kulnara, with residents told it’s now too late to leave.

If you are in surrounding areas including Garland Valley and Putty you should monitor conditions.

Putty Road is closed between Milbrodale and Colo Heights.

Remote properties at Gum Tree Hole in the Wollemi National Park are also under threat, with the out-of-control Kerry Ridge Fire again upgraded to an emergency warning.

The blaze is burning east of Nullo Mountain and north-west of Putty and has scorched in excess of 13,000 hectares.

Strong winds are also proving hazardous for crews in the Yengo National Park, with spot fires forming ahead of the main fire front.

The Little L Complex blaze is spreading towards the areas of Paynes Crossing, Wollombi and Laguna, with flames expected to reach these communities later this afternoon.

Residents in Bucketty and Congewai should continue to monitor conditions, while those at Stockyard Creek, Quart Pot Creek, Yallambie and Blaxlands Arm should know what they’ll do if the fire threatens.

The Great North Road is closed between Wollombi and Bucketty.

An evacuation centre has been set up at the Cessnock Leagues Club.

Hot and windy weather is seeing an increase in fire activity in the Goulburn River National Park, south-west of Merriwa.

If you are in the areas of Tunbridge, you should seek shelter as the fire approaches.

Those along the Merriwa River, including on Cullingral Road should monitor conditions.

An emergency warning is also in place for the Carrai East fire, which is burning to the north west of Kempsey.

The fire continues to burn in the areas of Boonanghi, Wittitrin, and Dungay, with locals at Taylors Arm Road and Hickeys Creek advised to leave now towards Kempsey.

Crews are currently focusing their attention on backburning operations as they continue to strengthen containment lines.

There’s also an emergency warning in place for the Bangala Creek Fire, which is burning near Paddys Flat, north of Drake.

The fire is burning quickly in a north-easterly direction towards Paddys Flat and Pretty Gully, with hot and windy conditions leading to an increase in fire activity.

If you are in the area of Paddys Flat and Currawinya, you should seek shelter as the fire front arrives.