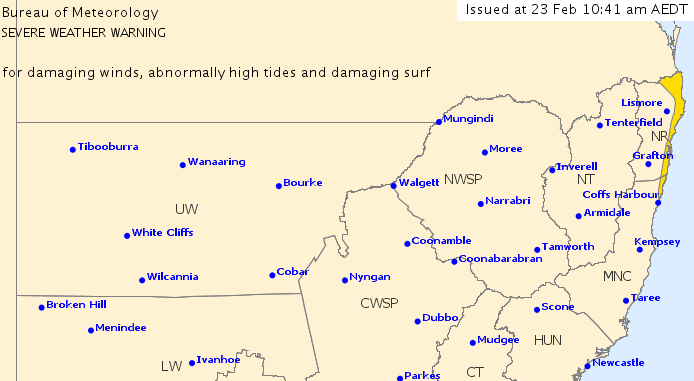 In combination with a strong high pressure system to the south, Tropical Cyclone Oma is generating gale-force winds and very large waves along northern parts of the NSW coast, coinciding with King Tides.

Over the next several hours, Oma is expected to further weaken into a low pressure system and begin moving to the north, with conditions gradually easing during Sunday.

DAMAGING SURF conditions, with waves exceeding 5 metres in the surf zone, may produce significant beach erosion along the coast from Coffs Harbour to the Queensland border today and on Sunday. Beach conditions in these areas are dangerous and people should stay well away from the surf and surf exposed areas.

DAMAGING WIND gusts in excess of 90 km/h are likely along exposed parts of the coast north from Yamba today, and possibly about the northern border ranges. Winds will gradually ease overnight and early Sunday.

ABNORMALLY HIGH TIDES are expected around midday today, which may cause sea water flooding of low lying areas north of Yamba. Water levels at high tide may exceed the highest tide of the year by around half a metre.

For more information visit the Bureau of Meteorology’s website.