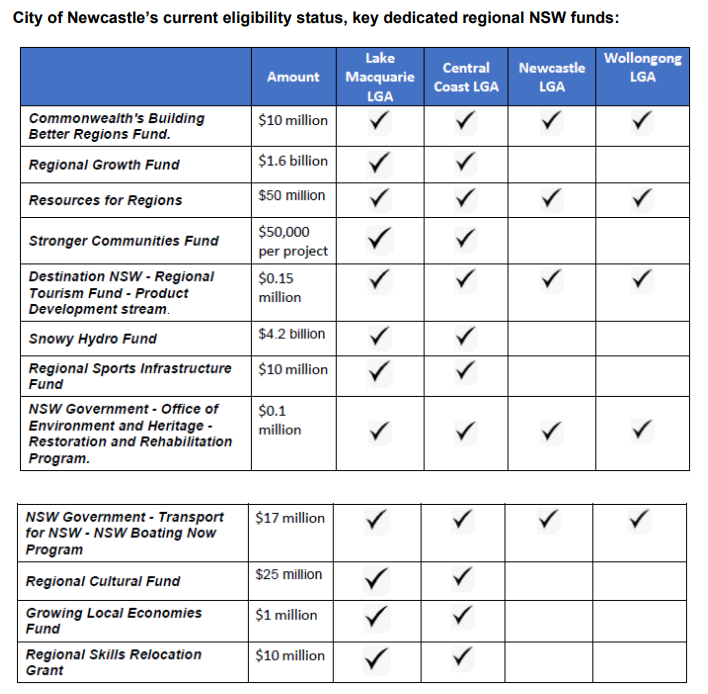 The City of Newcastle has missed out on tens of millions of dollars each year in grants from the New South Wales Government, due to inconsistent funding rules and classification.

But this could change from here on in, with a formal review following a recommendation by state parliament’s Public Accountability Committee.

It was found unacceptable that large regional cities such as Newcastle and Wollongong were excluded from major grants when complementary grants programs are designed for both metropolitan and regional areas.

For example, Newcastle City Council is not eligible for the Greater Sydney Sports Facility Fund or the Regional Sports Infrastructure Fund.

As a result 15 recommendations were tabled on March 30 by the Legislative Council Committee.

The committee was also supportive of the initiation of a third ‘gateway city’ classification category which regional cities such as Newcastle would fall into.

It is something Lord Mayor Cr Nuatali Nelmes has been long calling for along with the councilors from the city of Wollongong, and Geelong in Victoria.

Together, the three councils have created the ‘Gateway Cities Alliance’ to work through ways major regional cities can receive a better share of funding and opportunities.

“We’ve found that through collaboration and a collective approach to advocating for Gateway Cities, we can better highlight our shared and unique characteristics and strategic assets, which we think can maximise national economic growth, regional resilience and local job creation,” Cr Nelmes said.

The picture outlines Newcastle’s current eligibility status and where it falls short in funding.