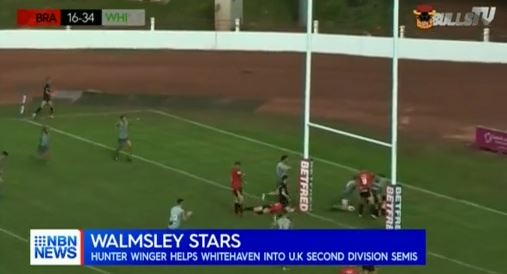 Merriwa’s Lachlan Walmsley has helped Whitehaven reach the finals of the UK’s second division, giving it a chance of being promoted to the Super League in 2022.

Walmsley was heavily involved in the last-round win over the Bradford Bulls.

With Whitehaven trailing 16-nil, the winger set up three tries to get his side back in the contest.

He then scored one of his own to cap off a remarkable comeback.

“Walmsley has scored a sensational try, that is game set and match to Whitehaven, 6 unanswered tries.”

Whitehaven will face Halifax in an elimination semi this weekend.

STATE HOCKEY HUGE FOR THE COAST

KNIGHTS TROOPS BACK TO RE-BOOT SEASON