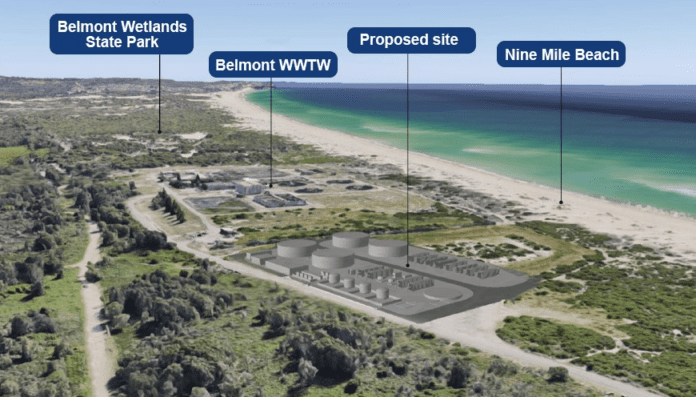 Plans to build a desalination plant at Belmont have been approved by the New South Wales Government, to help shore-up water security for the Lower Hunter.

The plant is designed to produce up to 30 million litres of drinking water per day, in response to drought.

The system involves piping seawater from a kilometre offshore to the plant, which will be built adjacent to the Belmont Wastewater Treatment Works on Ocean Park Road.

Hunter Water Managing Director Darren Cleary says desalination is one of only a few water supply options that is independent of rainfall.

He says it will help the state-owned corporation provide adequate drinking water regardless of changes in weather or climate.

“The Lower Hunter community gained a sense of what a prolonged and severe drought would be like when we all experienced the most recent drought through 2019-2020,” Mr Cleary said.

“Had the drought continued beyond three years, our region could have run out of water.”

“The Belmont plant is now part of our region’s ongoing water security package.”

“Hunter Water is finalising the review of the Lower Hunter Water Security Plan, which will outline additional proposed supply and demand measures to ensure a resilient water supply for our region that caters for growth and can respond to the impacts of drought and climate variability.”

The draft Lower Hunter Water Security Plan will be released for public comment next week.

NSW water minister, Melinda Pavey says the approval of the plant is a win for the Hunter, which can be left extremely vulnerable in times of drought.

“In a severe drought, water storages can drop from typical operating levels to 15 per cent in less than three years.”

Hunter Water says the approval is supported by comprehensive environmental impact investigations, which indicated that potential impacts can be mitigated through detailed design and delivery.