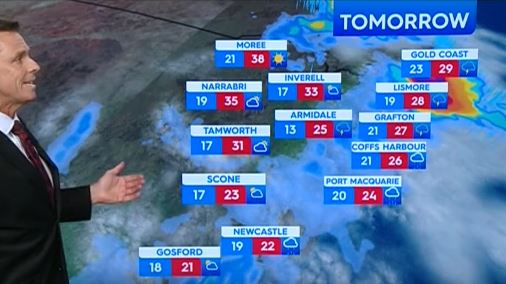 Here is the latest weather report with Gavin Morris.

The low has moved well off shore but still looks impressive on the satellite as it breaks down.

Most of southern Australia has returned to clear skies.

The wet weather with heavy showers at times will rebuild along the northern NSW coast into southern QLD tomorrow.

We are entering the realm of the high. Large pressure systems are going to dominate southern Australia in the final weeks of summer and into early Autumn. This will drive moisture across North East NSW and South East QLD.

Showers returning from Central Coast and Newcastle to the Coffs Coast region. Storms with heavy down pours from Coffs to the Tablelands and Gold Coast.

Fine and hot for the plains.