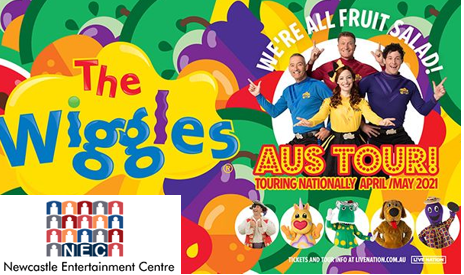 Children are set to have a ‘wiggly’ good time with the return of The Wiggles to Newcastle Entertainment Centre this April.

Following The Wiggles’ performance, Delta Goodrem, Carl Barron, Guy Sebastian and Keith Urban are set to star at the Arena in coming months.

The news of such performances has given audiences something to look forward to after the cancellation of so many shows last year.

2020 proved to be a slow and troublesome year for the Arts and Entertainment industry, which was dramatically affected by COVID-19.

But with tickets selling fast for shows set to hit the stage, performers and workers in the industry have gained hope for a more steady year.

Newcastle Council says it prides itself on delivering and hosting professional entertainment.

The coming year will be a true reflection of that.

Other venues such as The Civic Theatre and Lizottes are also shining the lights on many local performers.

‘Chess The Musical’ presented by Newcastle born ‘The Very Popular Theatre Company’ was one of many shows postponed in 2020.

It is now in in the final rehearsal stage and will debut next month on the Civic Stage.