FIRES: MORE THAN 60 TOTAL BLAZES ARE BURNING ACROSS THE STATE. MANY ARE YET TO BE CONTAINED.

The 51-year-old man is yet to be questioned by police about his involvement in the fire, believed to have been sparked earlier today about 10km west of Ebor, in bushland.

Witnesses reported a man acting suspiciously and police were alerted.

After investigations, detectives tracked the man to a location in the town where he was arrested.

No charges have been laid.

The Myall Creek fire in the Richmond Valley has been upgraded from Watch & Act to an Emergency warning.

The 5,200 hectare fire is burning near Bungawalbin, New Italy and The Gap and is out of control.

A third fire emergency is now gripping the state.

An out-of-control bushfire burning at Carrai East in Kempsey has again flared up.

The fire is burning to the west and north-west of Kempsey and has breached containment lines on the northern part of the fire, crossing the Armidale Road.

A second emergency warning has been issued in northern NSW this afternoon.

The RFS is warning a fire in Guyra Road, Ebor on the northern tablelands has reached emergency levels.

People in the village of Ebor, 80km east of Armidale should seek shelter.

The Bureau of Meteorology has issued a fire weather warning and total fire ban for the Greater Hunter, Greater Sydney and Illawarra regions.

At 6pm, the Myall Creek Road Fire is at Emergency Level. 7 Watch and Act fires remain.

The Myall Creek Road fire on the state’s north coast has been upgraded to Emergency Level. People in the area should seek shelter immediately. The blaze has burned through more than 4,500 hectares so far.

5 homes have been lost at the Bora Ridge fire since Friday.

Several NBN News reporters are on the ground today collecting information and stories of the damage on the Mid North Coast and North Coast.

A lot of smoke impacting Failford this morning. @nbnnews pic.twitter.com/cbVyElJ5rX

Community meeting held at Woodburn bowling club to update locals of the fire emergency. Residents of the Richmond Valley have been impacted by the Bora Ridge fire, which has been burning since Friday afternoon. @nbnnews pic.twitter.com/A5Ng30Djom

BREAKING: A man's body has been found in burnt out bushland at Willawarrin near Kempsey. It's believed to be that of a 58-year-old man who lived in a shed nearby @nbnnews

The Hillville fire has been downgraded to a Watch and Act.

The Hillville fire has been upgraded to EMERGENCY LEVEL.

Meanwhile in the Hunter, crews continue to protect properties at Greta. A resident captured these photos: 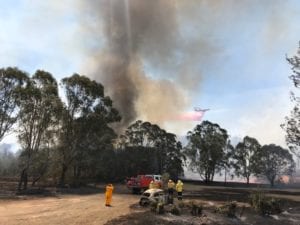 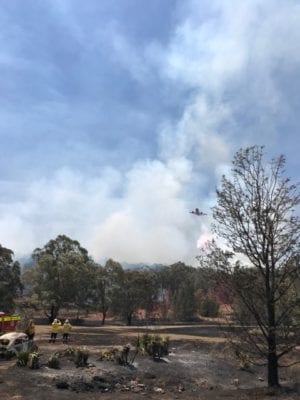 Footage has surfaced showing the extent of fires burning at a Watch and Act level on the Mid Coast. More than 40, 000 hectares has been burned near Rumba Dump.

The fire burning at Greta has been downgraded to advice level, after support was called in to help extinguish the flames from above. The blaze has burned through more than 20 hectares so far, and at least one home has been damaged.

The Harper Street blaze at Greta is upgraded to a Watch and Act. The fire is travelling north towards Leconfield.

Reporter Jacinta Lee is on the ground at North Rothbury and Greta today with updates.

Firefighters are containing a flare-up at Leconfield near Greta @nbnnews pic.twitter.com/JbVyzaqXCL

They're attacking the blaze from above now with flame retardant. At least a dozen crews on the ground @nbnnews pic.twitter.com/1bBSh67ert

Residents and firefighters are picking up the pieces from fires that reached Emergency level yesterday, believed to have been deliberately lit.

The latest from the fireground at North Rothbury this morning @nbnnews pic.twitter.com/hPxQF4C9uu

Fire crews are on the scene in Greta dealing with flare-ups and spot fires @nbnnews pic.twitter.com/H4FdjmfGZY

Yesterday was a day of exceptional fire activity and danger across the state – with crews and resources from Victoria used to help combat conditions.

The Rural Fire Service are treating several blazes in the Hunter as suspicious, including two that reached Emergency level as people were evacuated from their homes.

Sadly, dozens of properties were damaged or destroyed, and several people sustained injuries.

This morning, hundreds of houses are still without power in the region

Despite the worst of conditions, there has been no loss of human life reported.

Crews remain on the ground of several fires.

16 fires are burning at a Watch and Act level.

All Emergency level fires across the state were downgraded overnight.

RFS crews are bracing for a horror day of strong winds, low humidity and high temperatures across much of New South Wales, with a ‘Catastrophic’ fire danger rating in place for the Hunter, Greater Sydney and Illawarra Shoalhaven regions.

“We’ve got to keep reminding ourselves that catastrophic is off the conventional scale,” said RFS Commissioner Shane Fitzsimmons.

STOCKYARD EAST, BRIL BRIL | The Stockyard Creek fire is burning in the area of Mount Seaview, west of Wauchope. Those in the area are urged to take shelter.

GOSPERS MOUNTAIN, WOLLEMI NATIONAL PARK | The fire, near Lithgow, is threatening the areas north of Culoul and south of Fleetwing, and it’s currently 4 kilometres from Putty. Fire activity is also increasing in the areas of Mellong, St Albans and Upper MacDonald.

RUMPA DUMP, TAPIN TOPS | The Rumba Dump fire is burning quickly, near Dingo Tops Rd. Those in the areas of Elands, Bobin, Marlee and north west of Wingham should seek shelter.

MYALL CREEK ROAD, BORA RIDGE | A quickly spreading fire in the Richmond Valley area is burning out of control near Bungawalbin, New Italy and The Gap.

RESERVES ROAD, MARES RUN | This fire at Thunderbolts Way, Mares Run is out of control.

LIBERATION TRAIL, CLARENCE VALLEY | Large bush fires in the Armidale Road, Coutts Crossing, Nymbodia, Coramba, Nana Glen and Glenreagh areas are burning quickly towards the coast. The fire may impact on the areas of Woolgoolga, outskirts of Coffs Harbour, Sawtell and surrounding areas. Those in Nana Glen or Coramba and surrounding areas, are urged to leave now and head towards Coffs Harbour. Do not wait.

HILLVILLE ROAD, HILLVILLE | The Hillville Road fire at Hillville is spreading quickly towards Nabiac. If you are in the area of Nabiac, seek shelter as the fire approaches.

THUNDERBOLTS WAY, BRETTI | A very quickly spreading fire is burning near Thunderbolts Way and Nowendoc Road at Nowendoc. Those in the path of the fire are at risk and it is too late to leave.

Neighbourhood Safer Places are a place of last resort during a bush fire emergency.

They are to be used when all other options in your bush fire survival plan can’t be put into action safely.

NBN News will keep you up-to-date with the latest information on this bushfire emergency throughout the day.