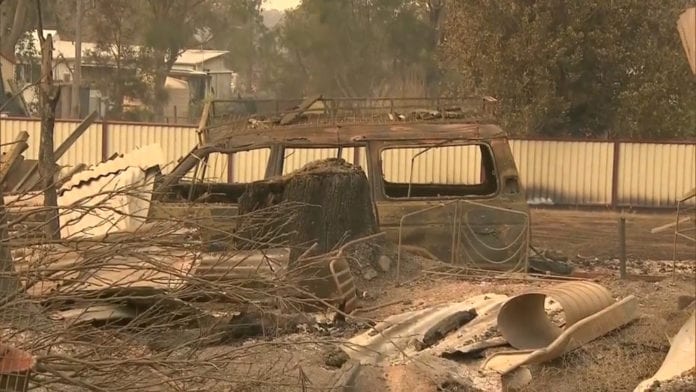 The worst fears of many were realised on Thursday, with a bushfire in northern New South Wales turning deadly.

Police confirming they’d found the remains of an elderly married couple, killed side by side, as they sought shelter in their remote property.

In a town already devastated by this week’s fire disaster, the news came as another blow to residents struggling to comprehend just what has happened to their small country village.

77-year-old Robert Lindsey and his 68-year-old wife Gwen were killed in their home at Coongbar, west of Rappville.

The memories of Tuesday night’s fire are still fresh in the minds of those who witnessed its sheer fury and devastation.

“The neighbour behind me, he lost his whole house, he’s lost everything, his car, his bikes, the whole house is absolutely gone, it’s absolutely heartbreaking,” local resident Cam McGuinness told NBN News.

“It moved fast, it was like a fireball through the scrub, took the whole lot out in 2 minutes”

Water from a backyard spa was the only firefighting tool Cam had to save his family home.

Unfortunately not all homes could be saved, some residents were forced to run for their lives as the fire approached, with 11 properties in Rappville lost.

Alongside homes, more than 200 power poles were burnt out, with many essential services cut off.

“The Rappville community want to get back to a level of normality and all agencies and government are doing everything they can to get them back into this town and functioning as soon as possible,” said Fire & Rescue NSW’s Greg Lewis.

FISH KILL IN THE TWEED RIVER AFTER WEEKEND’S HEAVY RAIN