Members of the Oxley Highway Patrol have left Tamworth, on their way to Canberra, for the 2019 Wall2Wall.

Known as the “Ride for the Fallen”, the ride is a special tribute that honours sacrifices of the many law enforcement officers killed during service.

At the end of their journey, in a final gesture of police solidarity and remembrance, riders will travel through Canberra to the National Police Memorial for a short, but poignant ceremony to commence the week in honour of Police Force colleagues and mates; their names recorded on the touch stones of the memorial wall.

Tamworth police officers are riding to remember Senior Constable David Rixon, who was gunned down while performing a random traffic stop in Lorraine St, West Tamworth, on the morning of March 2, 2012.

Despite desperate efforts of his fellow officers and paramedics, the decorated officer died shortly after. 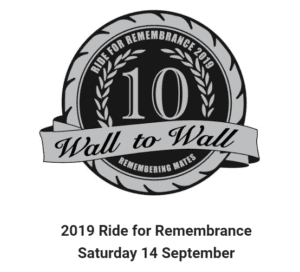 SKY MUSTER SATELLITE SYSTEM TO EXPAND ACROSS THE NEW ENGLAND