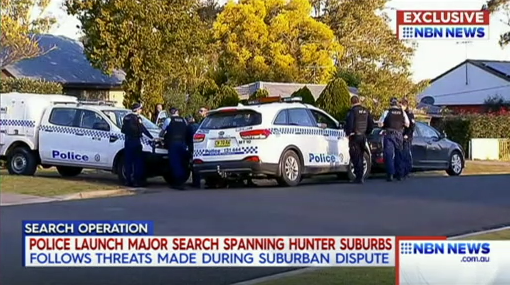 A police operation in East Maitland has wrapped up, without finding a man thought responsible for violently threatening another man.

Officers attended a home at Pepler Place in Thornton following a suburban dispute early this afternoon.

Port Stephens-Hunter Police have confirmed local schools were sent into lock down as a precaution.

PolAir and police dogs were called into the large scale search but the person of interest wasn’t located.

A major police operation is underway in the Hunter Valley.

NBN News understands it’s effecting parts of East Maitland, with the Police Dog Unit and PolAir at the scene.

The operation started in Thornton early this afternoon, before moving to Green Hills.

Thorton Public School was placed into lock down.

We’ll bring you more information as it comes to hand.