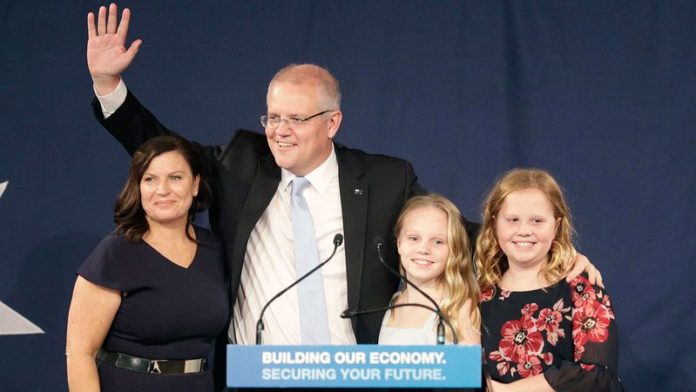 Against all the odds, Scott Morrison has pulled off one of the most astounding victories in the history of Australian politics – winning over millions of voters, and humiliating Bill Shorten’s Labor Party in an upset nobody saw coming.

Currently held by the Nationals’ Barnaby Joyce, the electorate of New England has scored its fair share of national media coverage since voters last went to the polls.

Joyce’s closest rival at the 2017 by-election was independent Tony Windsor, who chose not to contend this campaign.

RESULT | Barnaby Joyce retains the seat for The Nationals.

Having been first elected in 2004, Labor’s Justine Elliot retained the seat at the last election by more than 7,000 votes.

Covering from the Queensland border, south to Ballina and west through Mullumbimby and Murwillumbah, the electorate has been a key battleground for The Greens and is still considered marginal.

RESULT | Justine Elliot set to retain the seat with a primary vote of 31%.

Considered a key seat by both major parties, the result in Page is likely to be critical to who forms government.

Covering the Northern Rivers towns of Lismore and Casino, the electorate also stretches south through Grafton and along the coast to Sapphire Beach.

It’s held by the Nationals’ Kevin Hogan, by just under 2.5%.

Rob Oakeshott returns for another tilt at the seat of Cowper, having fallen well short at the last election, though the lay of the land is much different with the retirement of long serving member Luke Hartsuyker.

The task of retaining the seat for the Nationals handed to Patrick Conaghan.

The seat, which includes the townships of Port Macquarie, Kempsey, Nambucca Heads & Coffs Harbour will be one to watch.

RESULT | Patrick Conaghan on track to retain the seat for The Nationals, with 45% of the primary vote.

A traditional stronghold for the Nationals, David Gillespie holds the seat by almost 12%, having polled around 50% of the primary at the 2016 election.

The seat includes Taree, Forster and Dungog, as well as some northern parts of Maitland, with Labor’s Phil Costa appearing the most likely challenger.

Lost by the Liberals in 2016, the seat of Paterson, which includes Port Stephens, Maitland and Kurri Kurri, has become a Labor strong-hold

Incumbent Meryl Swanson holds the seat by more than 10%.

RESULT | Meryl Swanson retains the seat of Paterson, having secured more than 40% of the primary vote.

Currently held by Labor’s Joel Fitzgibbon, the seat of Hunter includes the townships of Cessnock, Denman, Muswellbrook, Singleton and Wyee.

Nationals’ candidate Josh Angus appears the main contender but would need a mammoth swing to do so.

Having scored more than 50% of the primary vote at the 2016 election, Pat Conroy will be looking to strengthen his grip on this East Lake Macquarie seat.

Stretching from Toukley to Charlestown, the electorate has been held by Labor since its inception in the late 1940s.

RESULT | Labor set to retain, despite a swing away from the incumbent member, Pat Conroy.

It’s never changed hands at a Federal level in more than 110 years, and the seat of Newcastle is one of the safest in New South Wales.

Incumbent member, Sharon Claydon extended her margin by almost 5% at the last election, with the Liberals Katrina Wark hoping to swing the seat back towards the Coalition.

RESULT | Sharon Claydon retains the seat with 46% of the primary vote. The incumbent well clear of her closest competitor, Liberal candidate Katrina Wark

Although still considered marginal, the seat of Dobell is held by Labor’s Emma Mcbride by around 5%.

Local councillor Jilly Pilon has been endorsed as the Liberals candidate, and will be hoping to return the seat to Coalition hands.

RESULT | Emma Mcbride on track to retain the seat, with a lead on two-candidate-preferred.

One of the tightest seats in Northern New South Wales, the electorate of Robertson is held by the Liberals Lucy Wicks.

In 2016, a swing away from the coalition left the Liberals clinging to the seat by little more than 1%.

RESULT | Lucy Wicks on track to retain the seat, with a swing towards the coalition increasing her margin.