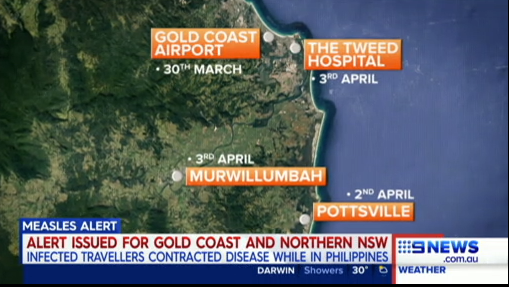 A measles warning has been issued on the state’s north coast, after two people in their 20’s developed the infection during a visit to the Philippines.

The pair flew into Coolangatta on Scoot flight TR6 on March 31, before catching an Uber to Pottsville.

On Tuesday, they visited the IGA at Pottsville, along with Woolworths at Cabarita, before heading to the Main Street Medical centre in Murwillumbah on Wednesday.

They also spend time in the Tweed Hospital Emergency Department on both Wednesday and Thursday.

Symptoms of the highly contagious infection, which can take up to 18 days to appear, can include fever, sore eyes and a cough, followed three or four days later by a red, blotchy rash.

LIGHTS TURN BACK ON AT NORPA FOR SPECIAL PRODUCTION