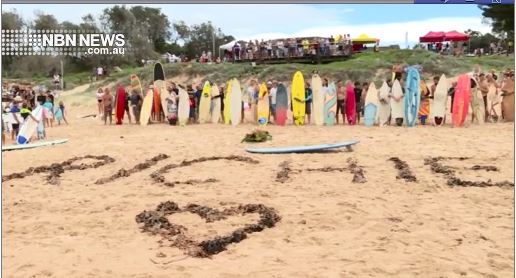 Around 200 surfers took part in a paddle-out at Sawtell this morning, tocommemorate the life of legendary surfer, Richie West, who died last week.

West came to Australia from California in 1973, and settled at Sawtell in 1975.

His wife Robyn was among those at today’s event, which showcased many of the surfboards he shaped during his career.

I would just like to thank everyone for coming today for Richie’s paddle-out and just to celebrate his life and his passion for surfing.

Wreaths were laid beyond the break by friends and members of Sawtell’s Boardriders Club.

PROGRESS STALLS ON A NEW TOWN PROPOSED FOR THE NAMBUCCA VALLEY