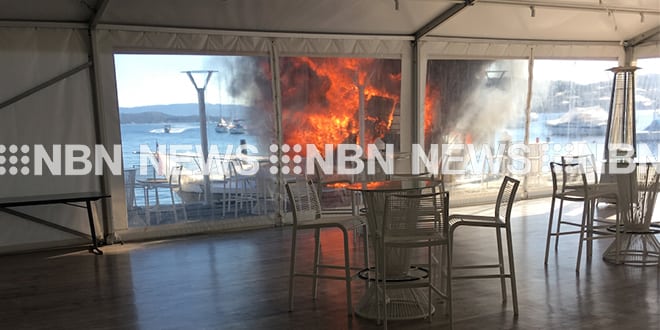 Dramatic scenes have played out at Lake Macquarie this afternoon, with a boat bursting into flames at Belmont.

Emergency services were called to the scene at the Lake Macquarie Yacht Club, at around 1:10pm following reports of an explosion.

Witnesses have told NBN News a man was forced to jump from the boat, with patrons at the club evacuated.

The 59-year-old Belmont man was treated at the scene by paramedics for burns to his face and hands.

He was taken to John Hunter Hospital in a serious condition.

The latest from the scene at Lake Macquarie Yacht Club – a man in his 50s transferred to John Hunter Hospital with burns to his upper body. I’ll have all the details tonight at 6pm on @nbnnews pic.twitter.com/47JXucnpCQ

Now all that remains of a vessel at Lake Macquarie Yacht Club @nbnnews @9NewsSyd pic.twitter.com/fBH5rnceq9

POLICE SEARCH FOR DRIVER WHO CRASHED INTO UNIT COMPLEX